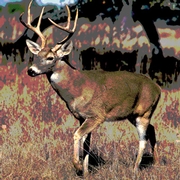 When people talk about eating meat, the images that typically come to mind are beef, turkey, chicken, pork or lamb. These meats and products that contain them are widely available throughout the country and are favorites of many families. However, there is a category of meats from non-domesticated animals—game meats—that also can be found in markets and restaurants throughout the United States. Although they represent only a small portion of the U.S. market their popularity is growing. This article identifies many common game meat species and discusses some of the food safety and regulatory issues associated with game meats, including the legality of importing certain species of meats from other countries.

The Growth of the Industry
The farmed game animal industry is diverse and has seen unprecedented growth since the 1970s. Its rapid growth in recent years is largely due to consumer demand for low-fat products and interest in alternative food products. In 2003, the North American Elk Breeders Association’s estimated that there were about 110,000 elk on 2,300 U.S. farms valued at more than $150 million….